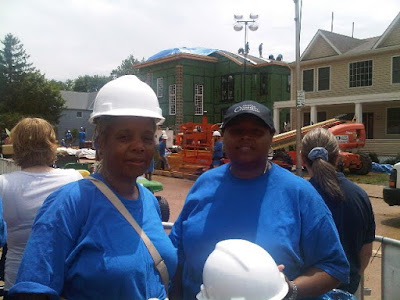 On Sunday, September 26, 2010 beginning at 7 PM, ABC's popular TV show, "Extreme Makeover: Home Edition" will air its season premiere. "Extreme Makeover" will kick off the season by airing footage taped during the week of July 12, 2010 when hundreds of volunteers gathered in Baltimore to build a home for the Boys Hope Girls Hope organization.

During the week of July 12, ACM's Gail Nesmith volunteered at the build site lending a hand with numerous jobs during the week.

"I have found that the best way to get through the challenging economic times for me, is to help someone else... and I had a really GREAT time doing it!"

To celebrate this exciting event, Gail along with the scholars from Boys Hope Girls Hope, will be attending a premiere party held at Notre Dame Preparatory. The family-oriented event with begin with a pre-party and then feature the broadcast of the season premiere of "Extreme Makeover: Home Edition" from 7-9 PM.

Don't forget to look for ACM's Gail Nesmith during the premiere episode!!